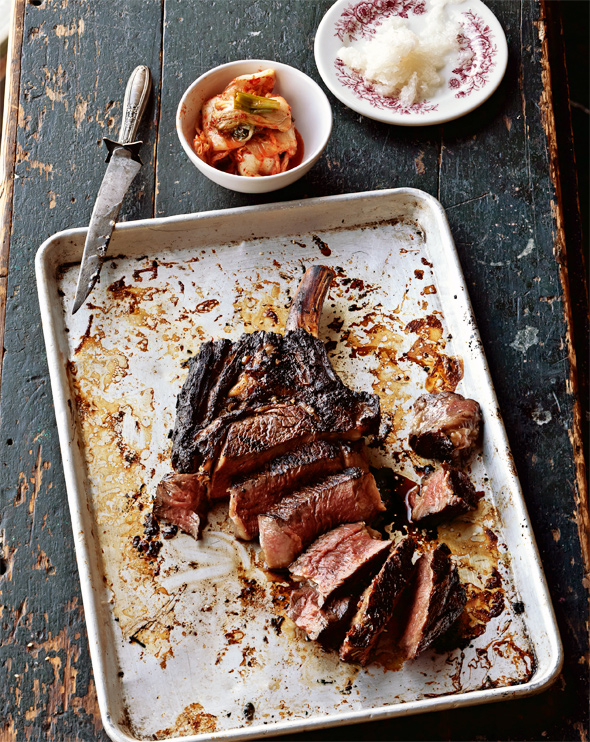 Here’s what I’ve learned from all the Korean cooks who’ve worked with us over the years: at the end of a long service, there’s nothing better than Korean barbecue. We like to go to Hahm Ji Bach in Flushing, Queens (I like Park’s in Los Angeles, too). But I wanted to learn how to make it myself. When I started asking Korean cooks about it, I learned that in every family recipe, there’s always one key ingredient in the overnight marinade for sweetening and tenderizing. Sometimes it’s Asian pears; sometimes it’s kiwi. But the most popular ingredient? The ultimate American ﬂavor: Coca-Cola.

This Korean barbecue recipe is deﬁnitely not authentic Korean bulgogi: it’s my backyard version of that sweet-salty, late-night ﬂavor. I like rib eyes for my version, but you can use any kind of steak that you like to grill—and actually, you don’t need a grill to do it. Even if you’re using the broiler in your apartment oven, I guarantee it will come out seriously succulent and ﬂavorful. I really love to serve this with Korean kimchee, which you may wish to consider optional, and grated daikon, even though it’s not Korean at all.–Andrew Carmellini

LC In Its Own Right Note

As the author concedes, this Korean barbecue recipe is most definitely–and defiantly–not Korean bulgogi. That’s a salty, sweet, supple, traditional Korean barbecue sensation that stipulates a specific cut of meat and a slew of other marinade ingredients. This is still salty, sweet, supple, and a barbecue sensation, though of a different (yet still darn enticing) sort. It’s also a cinch of a weeknight dinner. Just 10 minutes in the a.m. to toss together the marinade and plop in the steak and dinner is almost done by the time you kick off your heels shoes when you come home. The original recipe called for monstrous 2 1/2 pound rib eyes. We adore a swell steak, but we don’t often come across steaks of that girth, so thought we’d leave the exact size—and, yes, the exact timing—up to you.